I know that most people that attend Salem College have grown up in or near Winston Salem. I did not, I grew up in a city in Southern California, so I was very lucky that Dean Barr scheduled little walks, so that people could get used to the area. One place she took us to in October was the Mast General Store, which opened in Winston-Salem in May 2015. The Mast General Store was established in 1883 in Valle Crucis, North Carolina founded by the Mast family and bought by John and Faye Cooper who reopened the store in 1980, who have since the opened several more (preserve america.com/ mast general store.com). I like the Mast General Store because even among the busy hubbub city it has that old fashioned feel to it, as though it was a combination of the feeling Old Salem and downtown Winston-Salem. I know I can walk in wearing anything casual and find something to buy. It’s located about a mile from the college but it felt infinitely longer in the sweltering heat. The Mast General store is not only part of the Winston-Salem community but also the clothing store community and the candy store community. Even though I had brought some money Dean Barr told the group that she would buy us candy.

It was nice to step into the air conditioned store which supplied clothing, toys, beauty supplies, knick knacks, and candy. When I had originally heard about the candy I thought it would be like a convenience some near the cash register, I certainly did not expect over a dozen barrels half my size filled to their brims with candy. To say I was excited was an understatement, two of the girls walked around with a basket, so that we could put our candy in. I chose a bag of Reese’s Pieces, three caramel apple lollipops, and a gummy pizza. All of which I felt guilty for getting when I realized most everyone hadn’t gotten as much. We all thanked Dean Barr and as everyone huddled to take their candy, I walked to the other register intent on buying a soda and a piece of Fool’s Gold to send to a friend as a reminder of our fourth grade field trip when we panned for gold. It was my first time using my own prepaid card and I, for some silly reason started to tell the cashier my pin number and then apologized for my idiocy. Soon, I realized the group was leaving and I tried to not freak out while drumming my fingernails on the counter after I had been rung up, I moved quickly out the door and ran to catch up with the rest of my group.

I was happy to get back to the college to eat my candy and feeling very lucky that I had been able to catch up. I think the visit to the Mast General Store made me more comfortable leaving campus and discovering where other places in the Winston-Salem community are. Since recounting my experience with the Mast General Store I interviewed to people who could give other points of view on my subject. I interviewed an insider of the community, my friend Mallory who had been there once. The outsider I interviewed was John Harrington, who had never been to the store. Their accounts are detailed down below.

What comes to mind when you think of The Mast General Store?

“The outdoors and candy.”

Did you buy anything from The Mast General Store?

What would you buy if you went again?

“Chaco sandals and a shirt.”

Are the prices reasonable?

“Too high for my liking but it depends on the item.”

What comes to mind when you think of the Mast General Store?

“I think of Bass Pro shops”

“A store like the one in Hallmark’s When Calls the Heart.”

What items do you think they sell at the Mast General Store?

“With a name like general store there is probably all kinds of general merchandise. everything from beer to tube socks….depending on where they will sell bait, gasoline whatever the community needs.”

Would it a place you would shop at?

Credit of the photo above the text belongs to the Mast General Store website. 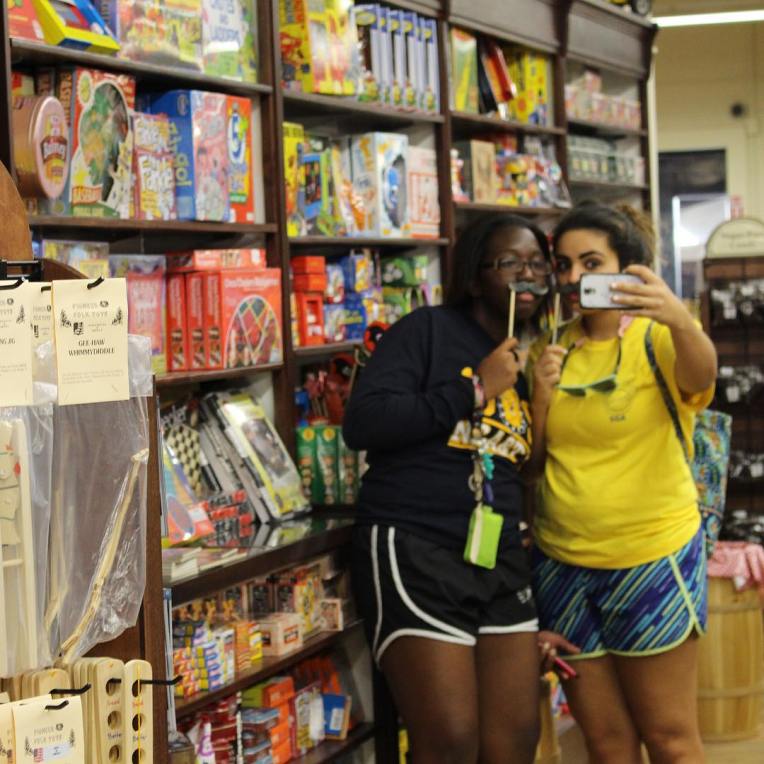 Credit of the photo above belongs to the Salem College Instagram page.